Ingenuity@Work in the Hamilton Spectator! Open house at Mohawk offers glimpse of the future 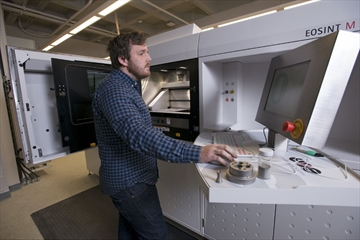 3D PRINTING Cathie Coward, Hamilton Spectator file photo Ross Mogridge works in the 3D lab with one of the printers that prints metal items in Feb. 2015.

Mohawk College researchers are in the final stages of developing software that will give millions of African children a chance at a better life.

The college is part of a consortium working on the project with money from the charitable foundation of Microsoft founder Bill Gates. The program they’ve developed will help doctors better manage vaccination records.

The project has been field tested in one region of Tanzania and is being fine-tuned for a national release.

“We’re just hammering out the final issues now before going national,” Brown said. “This can make a real difference for vulnerable children.”

It was one of many Mohawk initiatives featured Monday during an invitation-only tour of its labs for Burlington companies. The event was organized by the Burlington Economic Development Corporation as a way of linking small, local companies with research and development efforts.

Another creation of the health lab is a computer game being used to teach students the impossibility of planning a city in a way that pleases all players.

Called Balance: The Triple Bottom Line, the game was created by sociology and sustainability professor Shaun Iles. It lets students plan a community by applying theory they learned in classrooms. Along the way, they also learn important lessons. For example, that implementing green technology sometimes has to wait until a community is wealthy enough.

“It’s a way for students to apply the theory they learn,” Iles said. “It’s about who can use their resources best to sustain the largest population.”

For Burlington Mayor Rick Goldring, such work gives local businesses an edge in a tough and competitive world.

“It’s important that our businesses become as competitive as they can be, and Mohawk College is a great asset they can take advantage of,” he said after touring five of the school’s labs. “There is a great amount of applied research happening here that will help our companies stay competitive.”

Among the college’s research efforts is the work of the Additive Manufacturing Resource Centre where they are making advances in 3D printing.

“This is about producing solid objects from digital information,” faculty lead Robert Gerritsen told the group. “We’re making things here that are impossible to create with traditional methods.”

As an example, dean of engineering technology Tony Thoma said a Burlington architect offered a damaged 4,000-year-old Oriental vase so the lab could produce the pieces needed to repair it.

“This is something we know the Royal Ontario Museum is interested in because they have a lot of missing dinosaur bones,” Thoma said.

Other products of the lab include custom designed knee joints and replacement teeth.

“The sophistication of the labs here is more than I expected,” he said. “The interaction between the schools and industry has really been growing and that’s important because it’s getting hard to find skilled workers.”

Paul Subject, of Stanmech Technologies Inc., was one of the first companies to partner with Mohawk on a research project.

“We worked with them on an applied industrial research project just at the beginning of the interface with industry,” he said. “To see the progress of that has really been fantastic.”